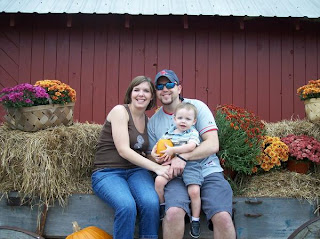 so we went to the pun'kin patch on saturday... and it was so much fun! meme and grandaddy loaded all the kiddos in their van, and nate drove the parents in our van. our first stop once we got there was the petting zoo! there were chickens, cows, a pig, a llama looking thing, sheep, and trace's favorite - "horsies!!" it was so neat b/c the kids all know the different animal sounds, but to hear a real pig "oink" and the horsies "neigh" was hysterical to see the looks on the kids faces!! 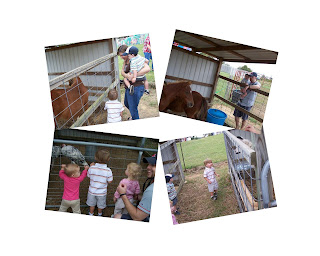 i tried to get lots of good pictures, nate might say our camera ruined the day... b/c sometimes i get so stressed trying to get the perfect shot that i forget to have fun. who, me? yes, me!! there were a few set-ups for some great poses, too bad none of the kids were in smiling moods. oh well, it was the thought that counts. and i like to think that i am being a good mom and making memories, not ruining the day :) 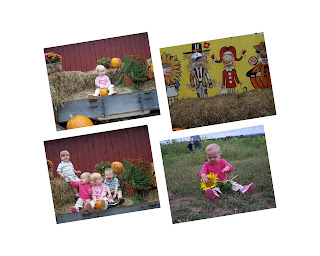 trace loved the pumpkin patch the most... although i think he tripped over almost every pumpkin and vine out there! he loved sitting and playing in the dirt with sticks or whatever he could find. at one point he was doing headstands in the hay. it was so funny!! i have to remind myself - he's a BOY and dirt (or hay) won't hurt! 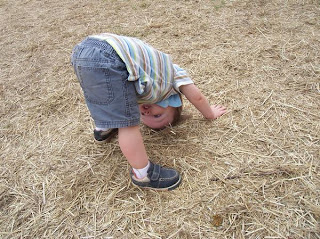 just having fun at the pumpkin patch! 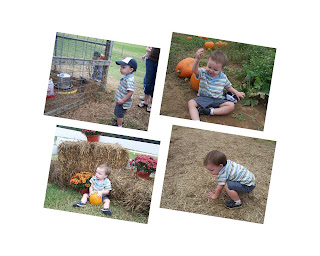 so even though trace was obsessed with the horses thruout the whole petting zoo and couldn't quit saying "horsie" when we went to actually ride the horse, he wanted no part in it! caden rode a huge horse ALL BY HIMSELF! i was so proud. and they said kenley was too little but she got to ride with grandaddy, and i think she loved it. trace was kinda skittish so i asked the man could we see if trace would freak out or not before i actually paid to ride, ummm. good think i asked. he was scared to death. this is the pic of us in front of the horse. poor thing, i hope i didn't scar him for life. we didn't get on, i just at least wanted to get a pic of us in front of the pretty horse. yep, good thing i had that camera. ha. 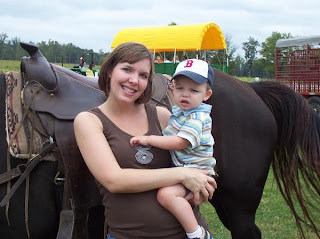 after we did all the fun stuff, we had a picnic lunch. i was too busy eating to take any pics, but it was fun too. a great idea, much more convenient than standing in line for 20 minutes and paying $25 for a hot dog, chips and a drink. the last thing we did was buy trace an inflatable guitar. caden got a spiderman, kenley got a dora, and trace wanted a guitar. it was the best $3 we spent all day! he has hardly put it down since we got in on saturday... but last nite he was playing with it in the house and swinging it around. he knocked over nate's dr pepper on the couch, end table, and floor. yeah, let's just say nate deflated the guitar and trace was sad! guess it's not too early to learn that there's a time and place for everything, even the guitar! i think i'll blow it up again for him tonite when daddy's at praise team practice :) 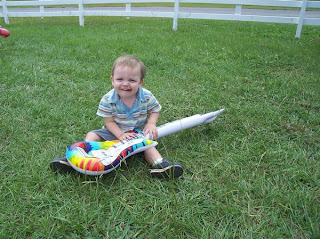 we had a really good time on saturday. the babies were big enough to see what it was all about and actually enjoy themselves. i think we are gonna have a pumpkin carving nite with bitsy and poppi since they didn't get to go to the pumpkin patch with us. i'll be sure to take lots of pics whenever that happens :) 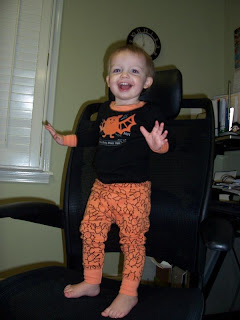 oh yeah, i couldn't resist these cute halloween pj's for $5.99 at oldnavy.com... def one of my weaknesses these days! trace's new favorite saying is "TA-DA" after he does a trick! so here he is standing up in the rolling office chair scaring me to death. but i got the cute pic!
in other news... we are just keeping busy and counting down the days til we meet lil lucas! only 117 days left til my due date... but when i went to the dr last week i asked if they would induce if i havn't had him by jan 30 and he said yes! YAY!!! there is an end in sight, only a little more than 3 months. wow. my belly is getting bigger by the day. i may post new pics soon. the way i see it, it will be halloween, then thanksgiving, then christmas, and then i will be having another baby before we know it! (let's hope it goes by that fast!) i got a great report at the dr, lucas was kicking and moving so much it was hard for them to chase him down and get his heartbeat. but all is well! i go back in 3 weeks for the sugar test, can't wait! 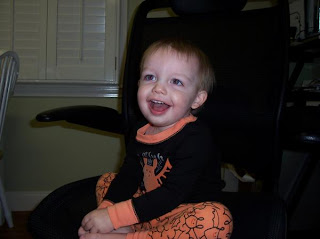 i just love this baby boy!

I am glad Lucas is doing great! What a great doc!!!

Hey, I love the pumpkin patch pics!! It sounds like you had loads of fun!! I love, love, love the Halloween pj's!! Trace is so cute!I can't wait to see you guys it has been forever!! Glad baby Lucas is good too!!
Love Ya,
Silena

pumpkin patch! :) gotta love fall. and thank the lord for old navy....how would we survive without them?

I'm going to add you to my blog too! That way it will send me a notification when you post new blogs! I hope you guys are doing great! I'm glad baby Lucas is doing great!