so we noticed a spot a few months ago on one of trace's front teeth. i made him a dentist appt and didn't think too much more about it. well the week before the appt, meme noticed that the tooth was loose! uh-oh, not a good sign. i thought it was a cavity and it must have gotten really bad. but the kid loves brushing his teeth so i had no clue how he would have a cavity. so we tell him he's goin to the dentist, and he talks about it non-stop! the first appt didn't go as i had planned- imagine that! he took one look at the tooth and knew right away that it would have to be PULLED! oh yeah, i was freakin out! apparently trace bumped that tooth a while back and it was dead, which was the reason for the gray spot. not only was it dead, but absessed and infected! it had to come out! the dentist gave us 3 options: children's hospital, an oral surgeon, or he could pull it! we opted for door # 3... although trace would have to be strapped to a papoose board, that was a much better option than having my poor baby put to sleep! so again, we talk up the trip to trace. we had this convo for days! trace: the dentist gonna pull my toof? me: yeah buddy, the denist is gonna pull your tooth. trace: oh, ok. i play with school bus? me: yep, you get to play with the school bus! (there is a huge wooden school bus that was our saving grace at the dentist! trace was obsessed with it!) so tuesday rolls around, and we are on our way to the dentist. the convo was about the same, but this time trace says: the dentist gonna pull my toof NOW? me: (freakin out big time!) yeah buddy, the dentist is gonna pull your tooth NOW. trace: i don't wanna go to the dentist! me: yeah buddy, we're gonna play with the school bus. remember? trace: member :) ok... so we met nate at the dentist... had a few minutes "to play school bus with trace" and then it was time! we took him back to the room and saw the dentist. nate and i had decided NOT to stay back there with trace. we handed him off to dr massey (dr massey willingham, at trussville pediatric dentist... i would HIGHLY reccomend him. he was incredible with trace!) anyways. trace went to dr massey better than he goes to the nursery workers at church! they started looking at the dolphins painted on the wall and nate and i went back to the waiting room. i barely had time to pretend to read a magazine when the nurse called us back. she told us they were exhuasted and he was such a fighter. about the time i was trying to apologize to her, she said she was kidding and trace did GREAT! whew, i was so relieved. the minute we saw him hey said HEY MAMA HEY DADDY! and wanted to get up... he was strapped down in very colorful "bracelets" as the dentist called them. and he was still a little high from the laughing gas. he still had the gas mask on, which he loves to call his "piggy nose!" they unstrapped him and we held him for a few minutes while we talked to the dentist. dr. massey said he was a great patient and it went so well. he said it couldn't have gone better with a 20 yr old! PTL!! (or, as trace says when he waves his little hands in the air- PTH, praise the hord!) he is so funny... he talks all the time and i am constantly laughing at how cute he talks!

ok. so wow, didn't mean to go into so much detail, but since i was so uptight and didn't think it would be appropriate to take pics while at the dentist to have his tooth pulled, i don't have any pics from our first visit, and i had to tell ya'll everything :) so if you are still reading this, thanks for hanging in there! i'm almost thru with the story!

ok. drumroll please... the moment you've all been waiting for. let me introduce TRAAAACCCEECE CARTEEEEEEEEERRRRRR WHITTTTTTTTTT!
the cutest little snaggle-tooth EVER!!!!!!! 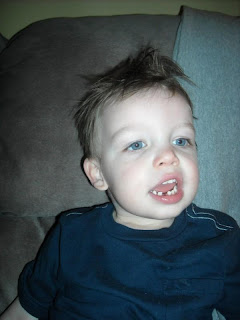 told you he loved his piggy nose! 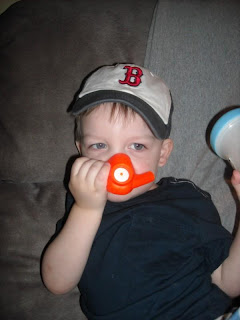 he was so big and brave! now he's back to his normal silly self! 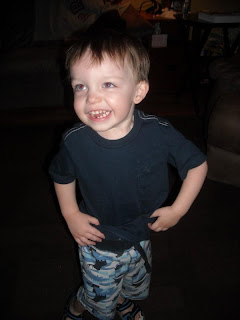 trace goes back next week for a cleaning... so glad we got the hard visit over with first! thanks for all the prayers, i know that is what helped things go so smooth. oh, and just to let you know, it took less than 10 mins total... we were thru so early that we were at publix by 8:30 to get his meds. too bad the pharmacy didn't open til 9. and too bad when we went back at 10, it took 35 minutes to fill his med. by that time trace was VERY tired, ill, in some pain, whiny, etc. ok. so that's another story! point is, it took way longer to get his meds than the trip to the dentist! yay for dr. massey... and yay for trace being so brave and strong!

Posted by Trace Car Driver at 8:45 AM