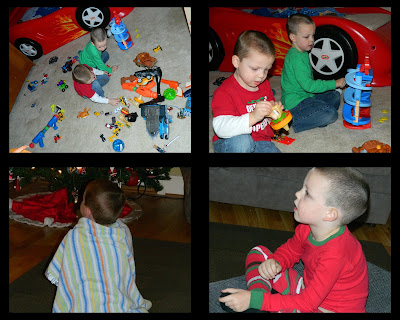 SANTA CLAUSE IS COMING... TO TOWN!
he's making a list,
and checkin' it twice,
gonna find out who's naughty or nice... 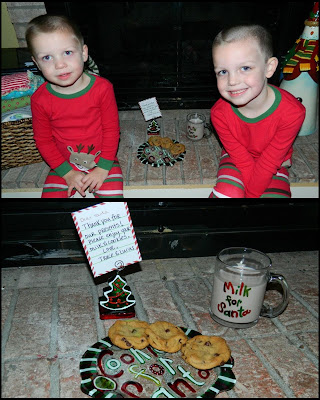 SANTA CLAUSE IS COMING... TO TOWN!
he sees you when you're sleepin,
he knows when you're awake...
he knows if you've been bad or good,
so be GOOD for goodness sake! 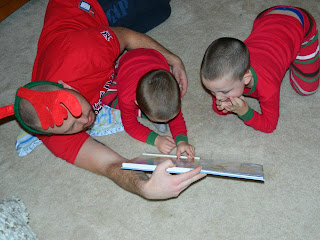 what a L O N G day for everyone... we left the house at 8:45 christmas eve morning, and got home about 6:30 that nite! we unloaded the thousands of gifts we opened earlier in the day and tried to semi organize them! they played for a little while and then, we made yummy cookies for santa! after that, they joined daddy in watching his ALL TIME fav christmas movie: a christmas story! (i have no idea why, but i hate that movie. every part of it gets on my nerves!) notice the pic where lucas has a blanky on his back like a cape, and trace is zoned out. yep, they are watching a christmas story with daddy! then, it was bedime! right before bed, we started a new christmas tradition. meme bought the boys a book that tells the (real) christmas story, and she read the story and recorded herself. the boys LOVED it... all they had to do was turn the page, and meme started reading! so above is a pic of nate and the boys right before bedtime. super sweet!!
i know the kids were so excited about santa coming... usually they talk and play for at least an hour once we put them to bed... but we told them santa wouldn't come until they were asleep, and that did the trick!! :)
shortly after, mama went to bed... knowing the boys, particularly trace, would be up at the butt crack of dawn christmas morning!! (she was right...)
﻿