can anyone guess where this cute little guy is?? 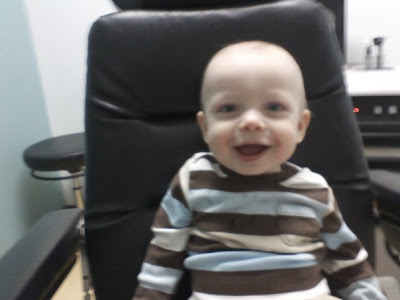 lucas took his first trip to the ENT! he had his consultation visit on wednesday. and it looks like he will be having a tympanostomy procedure done on monday, january 11. that's just the fancy name, the huge scary name that's the title of the informational brochure that the nurse gave me. i prefer tubes in his ears. easier to say, and not so scary sounding!
i am not gonna lie, i am a little anxious about the surgical procedure. i know that around 1 million ear-tubes insertions are performed by drs each year. but now that my baby is included in that statistic, it is more real. i read that most children will have at least 1 ear infection before they are 3. that seems about right, i think trace has had a grand total of 2. and he will be 3 in just 2 short months.
lucas on the other hand... (as best i can remember, and it's very possible i forgot a few appointments, phone calls, or trips to the pharmacy) has been treated for numerous ear infections in the last 6 months. he saw the dr for his "well visit" at the end of july. that was for his 6th month check-up. i think he was "well" for about a month. then we saw the dr twice in september for ear infections, and he also had an additional medicine called in during october. then we saw the dr twice again in november. and we saw the dr once in december, with an additional medicine called in the week before christmas. correct me if i'm wrong, but that's a total of 5 dr visits in 4 months, and a total of 7 different rounds of antibiotics! not to mention more than $300 for co-pays and medicines. wow. when i look at it that way, tubes aren't so scary, and monday can't come soon enough!
if you are wondering... here's the top 5 signs that lucas has an ear infection!
#5: he gets a cold. green snotty nose, crusty eyes. then the cold turns into a cough.
#4: he becomes very fussy, and cries out in pain for long periods of time.
#3: he has a reduced appetite, especially not wanting to drink bottles
#2: diarrhea (yuck i know!)
and the #1 sign that lucas has an ear infection:
pulling/tugging at his ears!
our usually happy-go-lucky lucas definitely lets us know when his ears are hurting! i am thankful for that though, that god gives us the sign that something is not right with our little man. i was actually shocked when we saw the dr yesterday, to learn that neither ear is infected right now. this may be the longest run in months. although it's only 2 weeks, i'll take it! but the dr did say that both ears have fluid on them! which i'm sure hurts as bad as an infection! i am beyond ready for my sweet boy to get some relief! so we should get a call friday to tell us what time to be at the hospital on monday morning. i've heard a lot of great things about tubes, and i know it's an outpatient surgery and is very quick. but it still scares me that lucas, my little baby, will be put to sleep with general anesthesia. i know it is all in god's hands though! nate and i both really liked the dr and nurses that we saw yesterday, so i know lucas will be in good hands!
please say a little prayer for him... that his ears stay clear until monday and we can have this surgery asap. pray that it will heal his little ears and the tubes will work wonders (for lucas and my checkbook- ha!) and also, while you're at it, i would appreciate any prayers for the mama and daddy too. thanks so much!
(and i'm sure it comes as no surprise that i will definitely take pictures and do an update post later monday afternoon.)

I'll be praying for Lucas, and mommmy & daddy!

I always say it's never a "routine" procedure when it is your baby!! i will say though, I love tubes! Both Will and Francie had to have them and they made a huge difference!! I'll be praying for you all!! Love ya, Silena