i remember counting down the days to hawaii, back when it was like 213 days or something. i can hardly believe our trip has come, and gone already! the trip we had been planning since summer of 09, when lucas was just a tiny lil babe. (for those of you who may not know, my best friend since 3rd grade, loni, and her hubby jake, made the move to hawaii in 09. they both have jobs on the island of kauai... she is a math professor at kcc and jake works in the courthouse as a prosecuting attorney. if you've heard how expensive the cost of living is in hawaii, you heard right. so what a blessing for nate and i to be able to visit and stay with friends and save costs on a hotel... we wouldn't have been able to afford the trip otherwise!)
anyways, so may 18, 2012... it seemed the day would never get here... then before we knew it, we were on the plane back home! we had an AMAZING vacation... seriously it could not have been any better. everything we saw, did, ate, etc, was just wonderful! if you have never been to hawaii, i would try and plan if a trip if at all possible. i'll tell you this much... we went thinking it would probably our only time to go. and we came home saying- we will totally be back! it was that awesome, and well worth every penny spent! i want to document as much of our trip as possible, even though it might take a while! i think the easiest way is to break it up into days. so here goes arrival day! stick with me and maybe you'll feel as though you were there too! ;o)

i heard from so many friends how awesome hawaii was, but i also heard as many times, if not more, how awful the flight was. well guess what... i was prepared for the worst, and it was not nearly as bad as i expected! :) we went from bham to houston to LA to kauai. i def think traveling was easier since it was broken up into 3 flights. the first leg was about 2.5 hours long, the next about 3.5, and the last about 5.5. i think that's correct... i might be off a little. anyways, movies, books, itunes, and the excitement of it all made the flight over pass by quick. and a xanex and exhaustion made the flight home bearable! ;) this pic was on the way to hawaii... 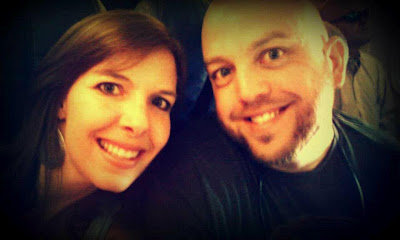 we made it!!! welcome to kauai... the garden island.
and oh my, throughout the week we would learn why it is called the garden isle. never in my life have i seen a prettier place!! 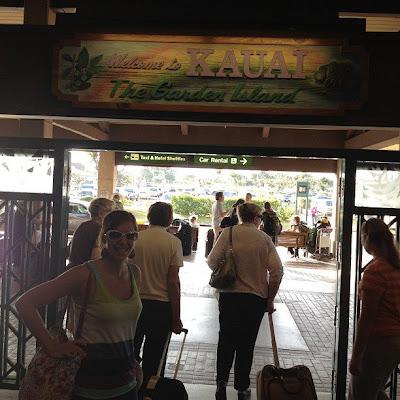 loni and jake picked us up at the airport... and loni made nate and i these beautiful FRESH lei's! they were so soft and smelled so good. i hate that they didn't last longer, b/c they were so awesome!! i love this pic of us at the airport!! ALOOOOOHAAAA! 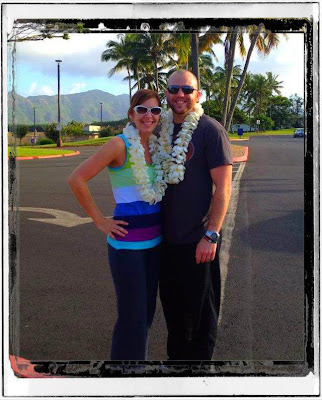 eating at duke's restaurant and bar after arriving friday night! beautiful view during dinner... starting the trip off right! 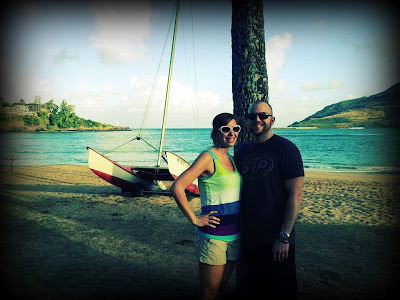 me and loni... best friends reunited! :) 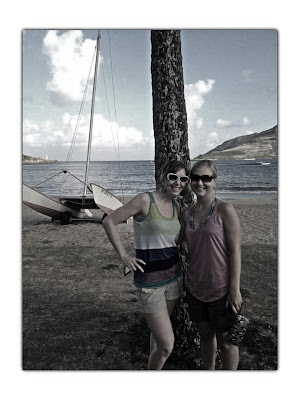